Conference for the Presentation of the Results of the URBACT III RU: RBAN project: "The End of a Very Beautiful Journey". 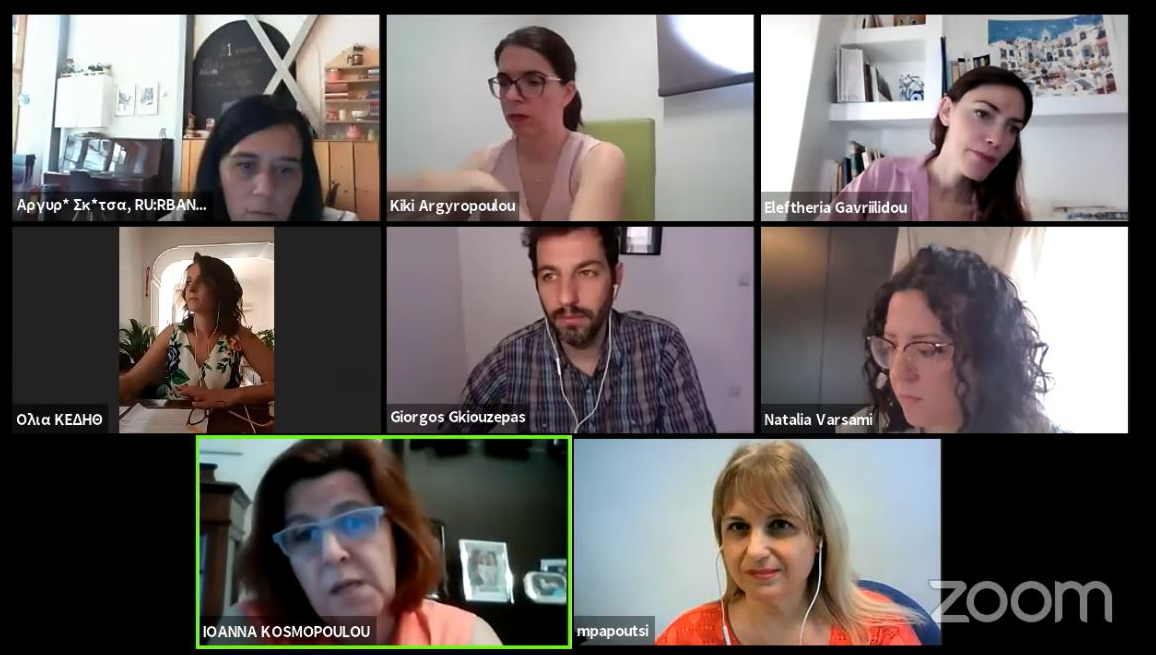 The experience from the participation in the transmission network RU: RBAN, the formation of a framework for the Urban Neighborhood Gardens in Thessaloniki and the presentation of good practices in the fields of urban resilience and urban agriculture were presented during the Presentation Day of the URBACT III RU project: RBAN "Resilient Urban Agriculture and Landscapes" implemented online by the Public Benefit Enterprise of the Municipality of Thessaloniki (KEDITH) on Tuesday 25 May between 10.30-13.30 on the occasion of the completion of the project and its significant benefits for the city Thessaloniki.

The event was greeted by Mrs. Ioanna Kosmopoulou, Deputy Mayor of Education of the Municipality of Thessaloniki and former President of KEDITH, Mr. Socratis Dimitriadis, Deputy Mayor of the Municipality of Thessaloniki, Ms. Natalia Varsami, President of KEDI. Θ. and Mrs. Maria Papoutsi, Representative of the National Contact Point URBACT.

Ms. Kosmopoulou, Deputy Mayor of Education of the Municipality of Thessaloniki stated that "after many delays and many adversities we managed to reach a happy ending and to form a framework for the urban neighborhood gardens in our city, which I hope will be the beginning of other similar efforts. The project left valuable experience, know-how and good practices ".

Mr. Dimitriadis, Deputy Mayor of Environment of the Municipality of Thessaloniki stressed that this issue is of most interest to the Deputy Mayor for Environment and that the gradual creation of vegetable gardens and orchards on unused plots within the urban fabric will continue. At the same time, he acknowledged that there are few green spaces in the city and "we do everything to increase them".

Ms. Varsami, President of Κ.Ε.ΔΗ.Θ. stated that after a series of actions and processes in the last year we reach the end of a very beautiful journey. We aim for the efforts of all to succeed in order to establish and implement the proposed framework for urban gardens in our city, thus giving impetus to the other cities of Greece.

Finally, Mrs. Papoutsis, Representative of the URBACT National Contact Point, referred to the fact that in the current programming period many cities were interested and participated in the networks formed under the program as the URBACT program is a springboard, an opening to European roads.

This was followed by very interesting presentations regarding the experience of KEDITH from the participation in the network, good practices of urban vegetable gardens but also a presentation of projects with a similar theme.

A few words about the project

The RU: RBAN project has been approved and is being implemented under the URBACT III Program. The network has been coordinated for the last two years by the city of Rome, based on the good practice of the "Rome Urban Garden Management Model", in order to transfer geographically remote experiences, experiences and practices to three interrelated themes: (a) development skills in organizing garden parks, (b) inspiring and educating people to manage gardeners (Gardeners); and (c) governing and regulating garden parks. The network includes six EU cities - Vilnius, Caen, Krakow, Coruιαa, Lures and Thessaloniki, which is represented by K.E.D.TH.

WHAT; A city full of young people, with a mosaic past and signs of different cultures, Thessaloniki stretches from Thermaikos to Kedrino Lofos and invites photographers, amateurs and non-artists alike, to capture its magic in a click. The Center for European...

Dear parents and guardians, The Public Benefit Enterprise of the Municipality of Thessaloniki, guided by its social role and its public benefit character and the current period, having a sense of responsibility to serve the institution of the family, announces that those...

"2023 European Year of Skills Looking to the future"

Familiarization workshop with the idea of ​​inclusion

EUROPE DIRECT: Announcing the Results of the Photo Contest "A Thousand Views, ONE CLICK!".